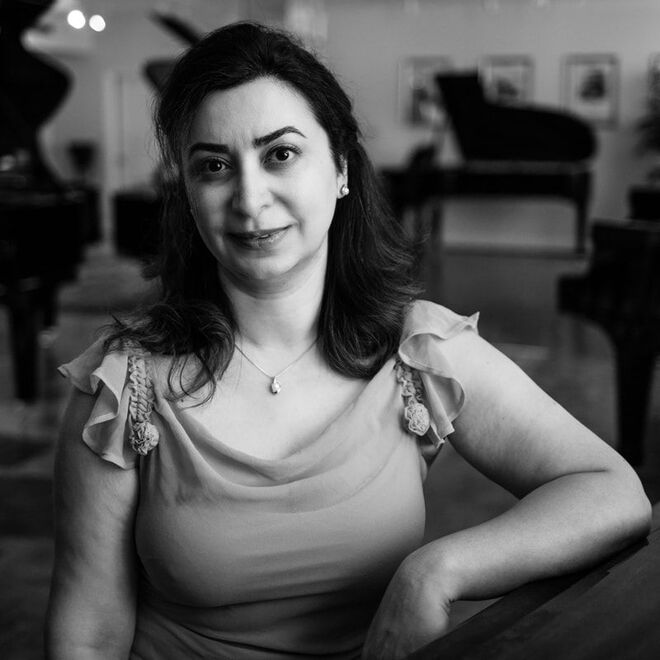 Pegah‘s music background, education and experiences come from four different countries: Iran, Russia, UK and Canada
From an early age, Pegah showed great talent and enthusiasm in music & so she started her long journey towards mastering the art of playing the piano when she was still very young.  Soon, she continued her studies with Dr. Mehran Rouhani and Gagig Babaian in Tehran, Iran.  In addition to piano classes, she took music courses such as Music Theory, Harmony, Counterpoint, Form and Analysis of Music as well as History of Western Classical Music.  Later, in 1998, her love for music pulled her all the way to Moscow, Russia, where she had the opportunity to live her dream of becoming a musician.  In 2003, after an intense period of hard work, Pegah proudly graduated from the prestigious Gnessin State Music Institute as a Concert Pianist, Piano Teacher and Orchestra Musician.  While studying in Moscow, Pegah performed in several concerts either as a soloist or playing in an ensemble.
​
After returning to Iran, she was immediately offered a job as a Piano Teacher at the Tehran Conservatory of Music.  At the same time, she also worked as an Accompanist in The State National School of Music.  Both jobs gave her the chance to perform in many Solo and Chamber music concerts including a concert specified to Baroque music.
However, soon she decided to continue her music education and this time she chose London, UK.  In 2007, she started her Master’s degree in Piano Performance at London College of Music and Media, where she had the honours to study with Professor Michael Schreider, and successfully graduated in 2008.  She also participated in different music courses and masterclasses such as North London Piano School in summer 2007, where she took master classes with Irina Osipova, Christopher Elton, William Fong, Ruth Harth and other professors from the UK and Russia.
Since moving to Canada, she has been pursuing her career as a Music Teacher and Performer earnestly and passionately.  In 2010, she worked in Alberta Music Academy, where she taught students from different levels and prepared many for the Royal Conservatory of Music exams.  In addition to that, she also worked as a Ballet Accompanist in Edmonton School of Ballet and as a Freelance Accompanist.  The jobs provided her with so many opportunities in accompanying students, instrumentalists and vocalists for their lessons, rehearsals, performances and the Kiwanis Festival.
At the moment, Pegah is living a vibrant life in Toronto, thoroughly engaged in music education.  Apart from being a Freelance Performer /Accompanist and running her own piano studio, she also teaches at  the Granite Club ( Granite School of Music .

Pegah Acknowledges the support of :